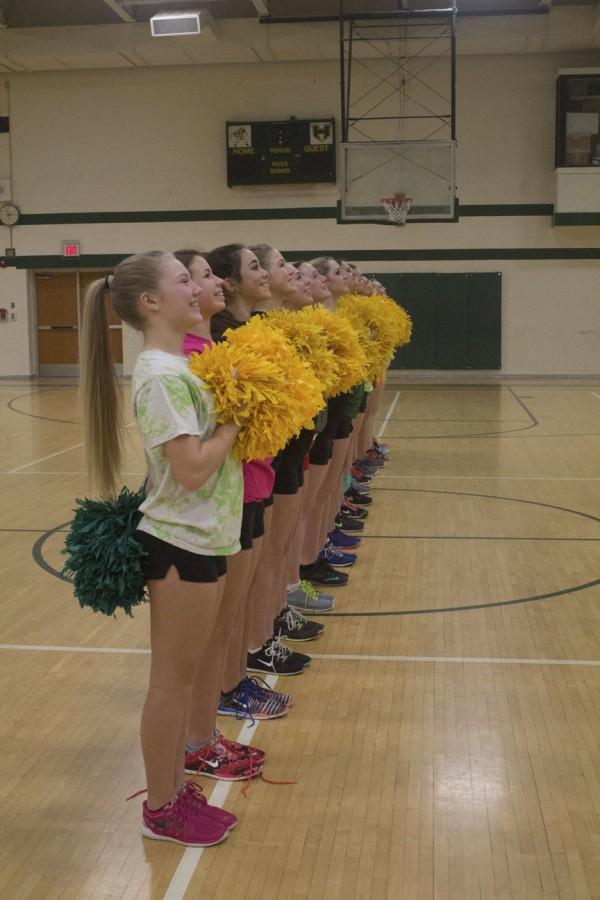 For three hours a day, six days a week, and ten months out of the year, the Howell Varsity Pompon team endures physical and emotional intensity, all for just four competitions: High-Kick, regionals, the Michigan Pompon Association Championship, and states.

The High-Kick competition was held on Nov. 8, 2015 at Saginaw University. Being judged upon a multitude of different aspects, the team’s hard work showed, as they came home that day with a second place finish in the medium division. This competition was only the beginning for the girls.

Next up, regionals. On Saturday, Jan. 16, the bar will be set for each team for the state competition at Northville High School. The pompon teams are judged on form, appearance, choreography, use of poms, skill level, team unity, and many other details having to do with their performance. The team will then be given a class to perform in at states, either Class A, B, C, or D; “A” being the best class possible.

“At regionals we do our routine and then we make little changes that the judges tell us or that we think we need to fix for states,” senior Sydney Ostafin says. “Every year that I’ve been in pom, we’ve been placed in Class A.”

This year, the new coaches and team decided that it would be in their best interest to go to as many competitions as possible, mainly to better prepare themselves for states. In the past, Howell Varsity Pompon have only done 3 competitions a year, but this year, they will be competing in an additional one, the Michigan Pompon Association Championship, that will be held on Jan. 31 at Alma College.

“I think it’s just going to branch us out in new ways and give us a different outlook from a different set of judges that we haven’t heard from before to critique our performances and our skill level, so that’s one of the biggest reasons we want to do it. We’re getting a fresh perspective on what we do and we are always willing to hear things that we can improve upon or what we’re doing well. We’re meeting new teams that we might not necessarily always compete against, so that’s always good too,” Coach Shelly Starr says.

It should be interesting to see how well the team does at this unfamiliar competition and if it will affect their performance at the states championship.

This is it. This is what they’ve all been waiting for. States.

As the last team performance of the season, the goal is for it to be filled with precise, sharp, and entertaining formations, movements, and ripples.

“Everyone puts in their best tricks and usually save surprises built into their routine so it makes the competition more exciting,” sophomore Andrea Spisak says.

After placing 5th last year, the team’s nerves have caused them to work harder than ever for about three months straight to do well and improve their routine for the season’s final competition.

“We’re competing against so many teams and they all want it just as bad as the next team, so that’s pretty nerve-racking for the girls,” Starr says. “[Us coaches] want them to do their best and not have any regrets when they walk out on the floor.”

Sitting in for a bit during one of their after-school practices, a great sense of team unity and intense leadership from the captains and coaches is evident and could most definitely result in the team performing better than they could have ever imagined in this competition. Howell Varsity Pom most definitely has the potential to come out on top this year.

“The team knows that [states] is our last competition and basically the biggest one, so they’ve really been working for ten months for these three and a half minutes out on the floor,” Starr says. “We all want it so badly.”