Survivors scavenge to make mark on leader board 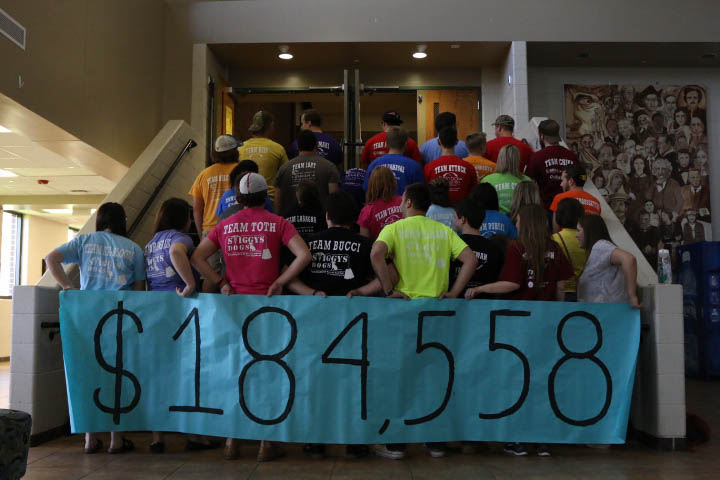 The survivors begin the week with grand entrances consisting of scooters, trumpets, and a hoverboard. To begin their survival, they handed over their phones, keys and any other electronic devices. Each with a wagon or bin full of belongings, they were to bring them up upstair to where they’re sleeping for the week, however the elevator was off limits. Bringing the wagons up stairs seemed like a challenge in itself, but through teamwork they managed.

After moving in, the survivors gathered in the cafeteria to begin banner painting. With forty five minutes to put their artistic abilities to use, they hurriedly got to work. Team Loth started out with a bit of a spill, but quickly recovered, while Team Chelsea and Team Maki got better angles by sitting on their tables. Team Lysterine ran into trouble by running out of room, but compensated for it by tapping more paper to lengthen it.

“I was eight minutes late because I was dying my hair lavender, but it turned blue. I’m here to have fun and raise money. I’m really looking forward to making new friendships this week,” Team First-Aid says.

To start off the 2017 Survivor week, alumni returned for a Q&A session with this year’s contestants offering advice and tactics for being the ultimate survivor.

Mrs. Dinatele began the meeting with a speech regarding how senior survivor was started. In 2006, sophomore Mackenzie Watts had passed away and two years later her class wanted to create a scholarship in her honor. After hearing the idea in a conference, the student council knew Senior Survivor was the way to go. The speech was followed by a 10th year anniversary video with footage of all the past years.

“You spent a week with people you had never talked to before and by the end of the week you end up with really close friends because of all that you went through with them,” an alumni says.

Deal or No Deal:

Each alumni is given a piece of paper with their name and year on the front and the amount of money they personally made written on the back. The alumni were split between 2008-2013 and 2014-2016. Each survivor was to pick one alumni from each side in hopes of choosing the two with the most money. To determine the order in which the survivors would choose, fourteen numbers were hidden around the school that they’d have to run and find. However, once they pick up a number, they can’t replace it for a better one.

With Team G-Money grabbing the number one, he began the challenge. Soon the survivors realized that the winners of past years didn’t necessarily make the most money. Team K-Cook finished in 5th, Team Loth finished in 4th, Team Lysterine finished in 3rd, Team Log with 2nd, and Team G-Money finished with 1st place in the first reward challenge of the week.

For this challenge, both first and second places received the prize that was chosen by the winner. Last night, G-Money chose prize nine which was Dunkin’ Donuts in the morning.

The next and last challenge of the night was a scavenger hunt. The survivors began with a clue that would take them to a room somewhere in the school where they’d receive their next clue. After finding all eight clues, they were to find the foundation’s logo, a life preserver, and bring it to the main office. The first person to reach the office would win immunity.

After searching the classrooms and trying to decipher clues of Howell High School, Team G-Money reached the main office to claim his victory and gain immunity for Monday.

Before the night ended, two surprises were revealed. To start, immunity was awarded to the survivor who sold the most t-shirts which was Team First-Aid, who will be joining G-Money in immunity for Monday. The second surprise of the night was the announcement of a challenge for tomorrow.

In pairs, the survivors will compete in a lip sync battle. From a hat, each team chose a song and has until 7:00 p.m. tomorrow to practice. At seven, the teams will be performing their dance in front of a live audience. Admission is $1 and it will be in the Rod Bushey Performing Arts Center. All are welcome to attend.