Lego Movie 2- How Well Does It Piece Together? 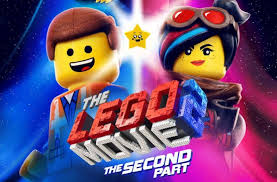 “The Lego Movie” was a surprising success for a toy brand blockbuster. It proved to be a deep and meaningful movie that brought something new to the table. Since the first film, the franchise has built a great lineup of movies. “The Lego Batman Movie” was a well-received spinoff that offered a fantastic and fun iteration of the caped crusader. The following film, the “Lego Ninjago Movie”, wasn’t as well received as the first two movies but was still an entertaining adventure that was worth the watch.

Needless to say, “The Lego Movie 2: The Second Part” had some serious weight on its shoulders. So how well did it stack up to the others?

“The Second Part” was directed by Mike Miller, and produced by Chris Miller and Phil Lord, who also directed of “The Lego Movie”. Most of the jam-packed cast that was in the first film made an appearance in “The Second Part” as well. The film started off right where the first movie ended; The epic cliffhanger where Emmet Brickowski (Chris Pratt) just saved the Lego world along with all of his friends, and was then visited by evil brick eating aliens.

When the movie sets up enough of an explanation and backstory for the first film, it immediately cuts to five years into the future. The aliens and the “evil” General Mayhem (Stephanie Beatriz) have terrorized the citizens of Bricksburg to the breaking point. The pieces of plastic have learned to become gritty and tough. Their new home is “Apocolypsburg”: a post-apocalyptic, “Mad Max” styled town where all citizens are now heavy load bearing brutes. They figured that the duller and greyer they seem, the less likely the aliens would come to attack. Everyone seems to fit in, except for Emmet, of course. The main protagonist hasn’t changed a bit, and inevitably because of his upbeat and quirky attitude, he is to blame for his best friends’ demise. Lucy (Elizabeth Banks) and much of the supporting cast get abducted and taken to the Systar System.

As the plot starts to develop, Emmet builds up the courage to save his friends, and on the way, he meets Rex Dangervest (Also played by Chris Pratt). Rex is a danger-seeking mash-up of all of Chris Pratt’s major roles, that is everything Emmet should be. The two make friends and go off together in order to save the world.

When the film starts to really piece together, it’s apparent that the filmmakers had an immense amount of fun while creating this project. Again, the Lego brand shows that it can be exceptionally fun. Though it seems that it would be easy for a toy brand to make something fun, the amount of detail and thought put in this movie shows in every scene.

Although the filmed lacked the voice talent of Morgan Freeman, which was a big draw to the first movie, it never felt like it lacked any of the charm. The clever punny names for some of the objects in the movie had the same amount of wit as the first movie. The movie maintains the “toys coming to life” principle and plays it extraordinary well. From the basement door being a black hole, or everything in the “Systar System” being the antagonist-like sister, the binding between what is real and what is in lego seems incredibly thought out.

The film continues to maintain an awesome balance between kid jokes, and more adult references that were so prominent in the previous three installments. For instance, Bruce Willis has a brief cameo in an air vent, a reference to “Die Hard” that most of the children in the audience hopefully would not understand.

Obviously, with a movie such as this, there can’t be a bad ending. Though I never expected one, the filmmakers played a fantastic and heartwarming twist which was clever and unexpected. As the bricks come closer to the ‘ar-mom-olypse,’ the pieces start to really stick together and the meaning of the story begins to slowly fall into place.

The only real complaint of the movie is the somewhat lazy writing when it comes to explaining the time traveling aspects. The film legitimately tells you to just look over the explanation and just go with it, and when doing so you still have fun.

“The Lego Movie 2: The Second Part” proved to be another heartwarming film that arguably stacks itself up to the first film. With a colorful world that’s completely immersing and a cast and story that leave you wanting more, it seems only fair to give this movie props for sticking out of just another movie franchise only being focused on money and not the fans themselves.

This film is a wild and clever adventure that never shows a dull moment. It has a clever and unique tale that takes the formula of the first film, and builds something off of it. “The Lego Movie 2: The Second Part” is an incredible feat that deserves 9/10 bricks.