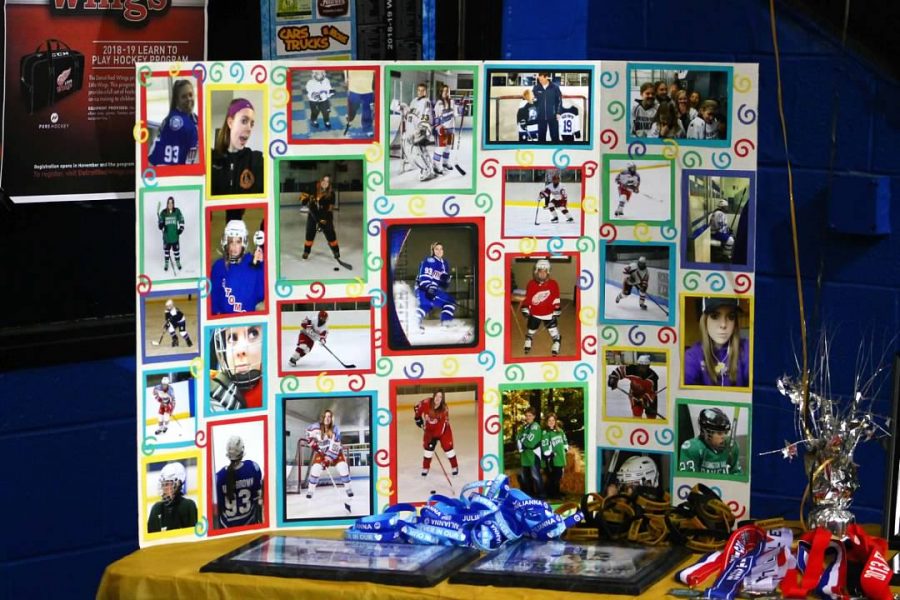 Last year we lost one of our fellow Highlanders, Julianna Ward-Brown. Julianna touched the lives of many during her 16 years. So much that the class of 2019 decided to award many scholarships in her name. There was a total of seventeen scholarships given out to this year’s senior class.

“In her footsteps, we have created the charity, Julianna’s Wishes, to help children and families in need and to support local and school organizations and sports teams,” said Beth Brown.

Not only did she bring smiles and joy to her peers, but she also brought it to everyone surrounding her. She made people happy whether they were on one of her teams or not.

“Julianna was always laughing and giggling on the courts.  No matter what situation she was in on the courts, she always had a big smile on her face,” senior Madison Melby said.

Julianna made the girls’ varsity tennis team her freshman year. She played half of three doubles which is very impressive for a first-year varsity player.

“She brought so much light and personality to the courts. Everyone always ended up in a fit of laughter because of her. Even her opponents loved playing against her during their matches, you could always see her dancing and having fun on the court,” senior Nina Heikes said.

After two years of playing on the girls’ tennis team, Julianna was the manager for the boys’ varsity tennis team at the beginning of her junior year. A small group of volunteers from the boys’ tennis team decided they wanted to honor their friend and manager by putting up new benches at the courts and having one dedicated in her name.

“A lot of seniors on the guys’ tennis team contributed in some way, whether it was by selling slushies after school to raise money or helping to install the bench,” senior Gordon Hartford said.

Julianna was also a part of Meijer AAA Hockey for six years playing as their goalie. She even won states twice. Many tributes have been held in honor of Howell’s fallen highlander. The HHS varsity boys hockey team recently held a game in Julianna’s honor.

“Overall it was just a great night we raised a lot of money with the 50/50 and the raffle,” senior Graham Hassan said on behalf of the HHS boys varsity hockey team.

From peers in her classes to close relationships with her teammates, anyone who was lucky enough to have gotten the chance to know her, will always remember her beautiful personality and smile.

“Julianna was truly an incredible person. All she ever did was make people happy. She always had a very upbeat and positive attitude. She made you feel happy 24/7 like sadness wasn’t an option,” junior Allen Brennan said.

Also orchestrated for Julianna and other kids who are not with us anymore was a run at the end of last summer.

“We hosted a 5k to honor kids that have we have lost too soon.  We are hosting our 2nd annual Miles for Smiles 5k September, 28 and are hoping to honor even more kids,” mom of Julianna, Beth Ward-Brown said.

Julianna’s Wishes will carry on her principles and essence for as long as can be.