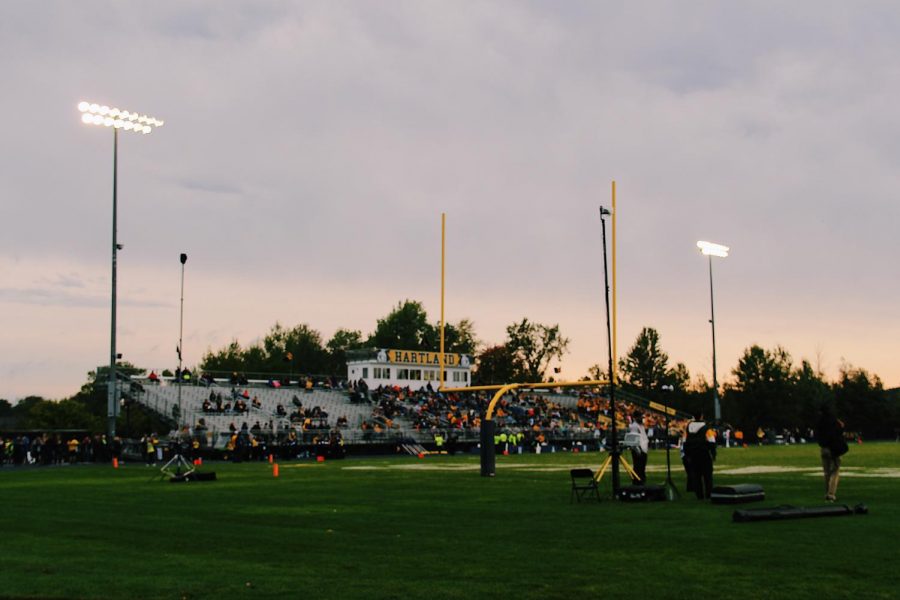 The Channel 7 game of the week on Friday between the Hartland Eagles and the Howell Highlanders was sure to be a fierce match up, with both schools having a history of bad blood. Both teams were just 2-2 going into the game, so it was a pivotal game for both sides. Neither school was showing any mercy on social media pregame, and that intensity was shown during the game.

“The difference [with Hartland] is that we know them pretty well, and we’re pretty close to them proximity wise,” Howell coach Aaron Metz pregame said. “There’s a lot of interaction between the two schools, and I think that creates a natural rivalry.”

Hartland was the first team to get an edge, forcing a fumble on Howell’s first drive and capitalizing with a touchdown shortly after. The two teams went back and forth for the entire first half, trading touchdowns. Hartland led by one at 14-13, before the Eagles scored another touchdown to finish the first half up eight.

“[We just have to] focus, we had a lot of mental errors in the first half,” Howell running back sophomore August Johanningsmeier said. “We need to bring energy from the start.”

It had been raining through much of the first half, and after a Hartland touchdown that extended their lead to 28-13, the field and bleachers had to be evacuated due to lightning. The storm showed no signs of slowing down, and the game was postponed to the next day at 1:00 p.m.

“Coming in we knew we might have to play Saturday,” Howell lineman junior Grant Porter post game said. “We knew it would be different because we had to play with the soreness from the day before. But I think we came out and adjusted well and that’s something you gotta prepare for.”

Howell came out of the gates Saturday with a different attitude. After a missed field goal by Hartland, Howell quarterback senior Zach Metz connected with Bryan Greene for a 10 yard touchdown, bringing the Highlanders within eight. After a Hartland field goal, Howell went on a drive spanning 80 yards, while running the ball 14 times. Howell capped off the drive with a one yard touchdown and two point conversion by senior Jonah Schrock, cutting the lead to just three, at 31-28.

“We did a really good job on the line, they were doing their job making holes for the running backs; our running game is big for us,” Johanningsmeier, who finished with 95 yards and a touchdown said.

Three offensive plays later, Hartland was faced with a third and long situation from inside their own five with just over two minutes to play. With the play call of the day, Hartland had wide receiver Logan Tobel launch a deep pass to running back Gage Delanoy for a huge first down that effectively ended the game. From that play on, Hartland ran out the clock and the Highlanders’ comeback ran out of time.

“For our team, [our goal] is to keep coming together, to keep having an identity of being a tough run-the-ball team, to play solid defense and create turnovers,” Coach Metz said. “We just need to keep building on our successes each week.”

Despite outscoring Hartland 15-3 on Saturday, this loss has to be a let down for Howell. The Highlanders fell just short of a miraculous comeback, as their mistakes Friday night came back to haunt them. But even after a loss to Hartland and a 2-3 start to the season, Howell showed promise, and proved it’s too early to count out the Highlanders.