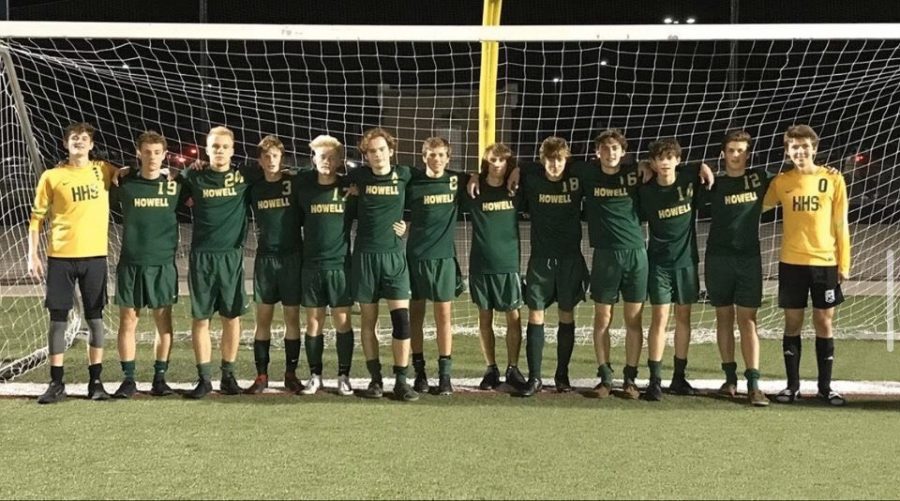 Howell Varsity Soccer had not won a game in their league this season, and was going into senior night last Thursday with a sense of urgency. The Highlanders were heading up against the Northville Mustangs, who were also struggling as of late. As day turned to night, the game started and the fight between the two sides began.

“[Our confidence] was definitely up coming in on senior night,” senior Nick Goodwin said. “We had a lot of seniors that wanted to win, and we just wanted to turn our season around.”

Through the first half neither team showed any signs of letting up a goal, as Howell goalie Logan Merrill stopped multiple Northville shots. Howell focused on sitting back and playing defense, and it was paying off on that side of the ball. However, they weren’t able to get anything going on offense, as the first half finished at 0-0.

“We just had to play good defense, and get that crucial goal, and take our chances,” senior Kyler Melmoth said. “This is the highest the energy has been [all season]… we just really felt that we could finish the game strong.”

After each of Howell’s 14 seniors were sent off during halftime, the Highlanders came to play in the second half. As time ticked off the clock Howell still wasn’t able to score, but they were getting opportunities. Closing in on one minute left in the game, it was beginning to look like a sure tie. But Howell moved the ball down the field, and had a chance to put the game away. With time running out, the ball went into a group of players just yards from the Northville goal. Players from both sides fought for the ball, and Howell senior Max Reis kicked it out of the group and into the bottom left corner of the goal. That put Howell up 1-0, with 59 seconds left, and they were able to hold on to secure the victory.

“Most of our team is seniors, all of the guys just wanted to come out and compete and win,” Goodwin said. “We’re [playing] to win, and we want to carry that momentum through into districts.”

There’s no doubt that the win was a vital one for the Highlanders heading into the postseason. Despite a lackluster season overall, a victory on senior night was just what this team needed for their confidence. Howell isn’t ready to give up on their season yet, and if they continue to play the way they did against Northville, it wouldn’t be a surprise if the Highlanders make a splash in districts.