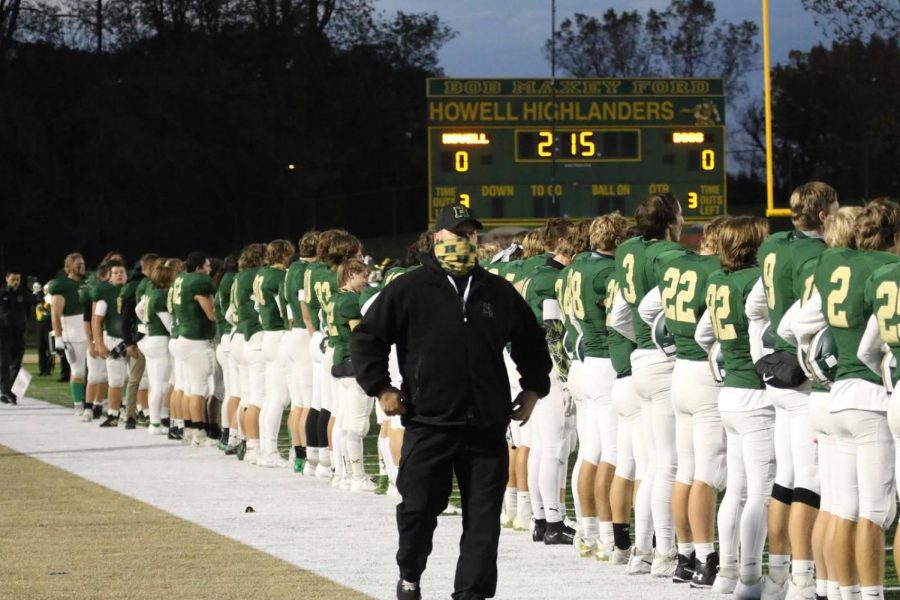 The Howell Highlanders took the field in front of a student section for the first time this season last Friday against the rival Brighton Bulldogs. Howell came into the game riding a three game winning streak, and looked to get revenge on the Bulldogs after being blown out last year. With fans in the stands there was an energy around the game that hadn’t been felt in a long time, as high school football returns to normalcy.

“It’s always better playing against Hartland or Brighton, [the build up] is definitely different. It was nice [to have a student section], just to have our backs and be loud for us,” junior quarterback Nolan Petru said.

Brighton received the opening kickoff, and quickly scored on a 44 yard touchdown pass from John Aurandt to Mason McGuire to get things started. After an unsuccessful onside kick, Howell proceeded to strike back with a 35 yard touchdown run by junior running back August Johanningsmeier. In the blink of an eye the score was 7-7, and a shootout looked to be in store. But the defense on both sides did improve through the first half, as neither team let up a score until the Bulldogs’ Aurandt found Owen Ehman for a nine yard passing touchdown to make the score 14-7 at the break.

“August [Johanningsmeier] being back in the offense helps a lot, he’s obviously a beast and very hard to tackle so that’s nice to have. [Junior Linebacker] Noah Ramonaitis also played well. He made a lot of great tackles and kept our defense in check,” Petru said.

Howell’s offense continued to look flat through much of the third quarter, but the momentum seemed to turn when the Highlanders appeared to recover a muffed punt at midfield. However the officials didn’t signal a change of possession, and announced a redo of the play. The explanation was an inadvertent whistle, and Howell had to punt again much to the displeasure of the home fans. The Highlanders rallied around the controversial call after tension had been building throughout the game. The Brighton defense finally cracked on a fourth down at their own one yard line, when Petru powered forward for a much needed touchdown. Howell followed up the touchdown with a two point conversion run by senior lineman Grant Porter to take the lead at 15-14.

“[Penalties] didn’t help throughout the game, but we can’t blame [the result of a game] on penalties, because we made mistakes too. [Our two point conversion attempt] shows that we don’t play to tie or lose, we play to win, and we proved it right there,” Petru said.

With just over two minutes remaining in the game, Brighton faced a crucial fourth down in Howell territory with the game on the line. A stop would have meant a win for the Highlanders, but Brighton not only converted on fourth down, but Aurandt found Sheldon Riley for a touchdown that put them ahead 20-15. Petru threw an interception on Howell’s final drive, and the Bulldogs ran out the clock to take home the win.

“After a lot of penalties we were losing our heads, we’ve got to keep our heads straight. We fought hard, but we’ll probably [get an opportunity to] play them again in the playoffs. We don’t want this feeling again,” Petru said.

The loss puts Howell at 3-2 on the season, and is a tough break for a team that looked like they were hitting their stride. Howell will try to bounce back when they travel to play 3-2 Northville this Friday. There’s plenty of football left to be played, and this type of a loss could be the extra motivation the Highlanders need to take off.