HHS Play, Musical: the show must go on 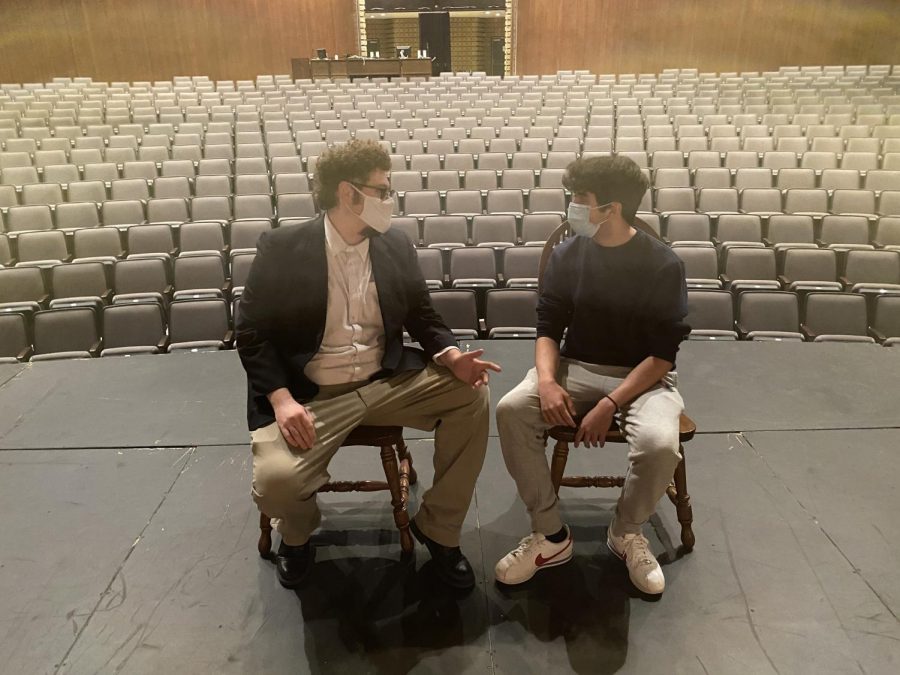 Pictured is Danny Maura, and Rohan Cheerla practicing for their play

In a year filled with change, the Howell High School Performing Arts Program has made adjustments to keep at least some school events, specifically, the spring musical and play.

The spring play will be performing on March 18th-21st. While tickets can be purchased online, the matinee play on March 20th will be live-streamed for the public.

“Anyone is able to purchase a ticket to attend, however, unlike most of our shows, we are limiting our audience. We will not be selling more than 150 tickets per show,” director Amanda Malo explained.

“The Dining Room” is a play about all that has happened within one room. The untraditional set that never changes allows for interesting storylines, with not one story being the same.

“It is a beautiful play with a very unique format. It does not have the typical story narrative that you usually see in plays. This is a collection of scenes that are independent of each other. In fact, the central thing linking the scenes is the location – they all take place in a dining room,” Malo said.

‘The Dining Room’ consists of 24 actors/actresses, 12 male and 12 female. Students in the play will perform as more than one character, reducing concerns about COVID transmissions.

“There is only one set that does not move. The scenes are relatively brief, so actors are not around each other in an enclosed space for more than 10 minutes at the most. If an actor gets quarantined during the production, we can easily put in an understudy or remove the scene altogether,” Malo continued.

Due to COVID-19, different procedures and precautions have gone into effect regarding every performing arts program. This means practices, rehearsals, and the performance itself have all changed in order to keep everyone safe.

“The Dining Room was also chosen specifically because of it being able to be done relatively safely. The most actors on stage at one time for any given scene is at most five people, so we are able to limit close contact,” senior Danny Maura said, who plays Stuart, Harvey, and Agent.

Like the play, this year’s musical, “The Forbidden Cabaret”, does not tell one storyline; it is a collage of songs requested by the community.

“This show is all selected songs from musicals that we could never do at Howell schools for various reasons,” choir teacher Brendan Closz said.

Changing up the model for a typical show not only calls for a safer production, but makes it unique and creates new opportunities for the students and actors to learn. Rehearsal and acting has been more challenging than ever for students.

“I think acting in a mask certainly makes it harder, but it’s not something you overcome. You don’t realize how important subtle facial expressions are to acting until you’re wearing a mask that covers two-thirds of your face. It’s been interesting trying to figure out how to be more expressive without actually being able to make facial expressions,” Maura says.

Public seating is becoming more available since the governor is now opening up audience spaces for performances.“The Forbidden Cabaret” will be available to see on April 15, 16, 17, and 18. ‘The Dining Room’ will be shown March 18, 19, 20, and 21. Both performances will start at 7 o’clock Thurs and Fri, Sat there will be a 2 p.m. matinee that will be live streamed, and another show at 7 p.m., Sunday will be a 2 p.m. matinee in person.