Howell comes up short in loss to Grand Blanc 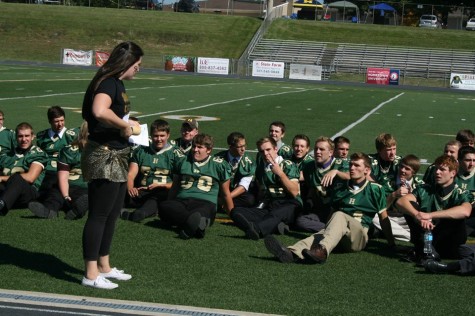 Football is usually a game of resilience and passion.  Add Homecoming, and it becomes one of the biggest and most monumental games of the year. Howell High School as well as community members showed up Friday night at the Howell High School Memorial Stadium for the Highlanders match up with the Grand Blanc Bobcats.

Howell was looking to resurrect their season from their 1-3 record while Grand Blanc has been rolling along steadily having won three games straight. The stage was set for an epic battle.

“It is easy to see that we don’t pity ourselves on our mistakes. We are quick to accept what has happened, making it easier for us to have our heads up for the next play,” says junior kicker and linebacker Greg Kearns.

Grand Blanc football has been about as steady as your grandparent’s marriage. Since joining the Kensington Lakes Activities Association in 2009, they are 24-4 against fellow KLAA West opponents. Since 1997, the Bobcats have accumulated an astounding record of 115-61 marking their win percentage at .653 over that time span. Grand Blanc has become a force to be reckoned with in recent years.

Once the homecoming floats and people of all ages began to march through the gates on Friday night, everything was set for the kick off. Grand Blanc was the first to strike as they amassed 15 points in the first half and went to the locker room with a comfortable lead.

The score at halftime did not quite accurately indicate the course of the game thus far. Grand Blanc had collected 219 total yards and had been on Howell’s side of midfield for the majority of the game. But the only statistic that matters is the scoreboard. The Highlanders defensive creed has been, “Just give us a place to stand and make them snap the ball.” This refers to never breaking, to struggle and scrap until the last whistle blows and one’s last ounce of energy is expended. And this they did.

“Once they ran out of surprises, we stepped it up,” Kearns says.

Howell felt poised for a dominant second half, as they have become to be known as a second half team though the course of the season. With much energy they rushed onto the field, eyes ablaze with determination, ready to fight. The third quarter was a strong one for the Highlanders. Their defense stood strong allowing no points and few yards. After a crucial muffed punt that gave the Highlanders great field position, Howell punched in a touchdown. This slashed the Bobcats lead to 15-7 and got momentum flowing in the home team’s favor.

Grand Blanc then responded in the fourth quarter to improve their lead to a 28-7 by two touchdowns by quarterback Treyvon Avery, the second being drove in with 1:20 to go.

“I thought you guys played pretty well, considering what a lot of people thought would happen. You made it a game in the second half and it was fun to watch,” says junior Derek Kerner, a local fan at the high school and hopeful student section leader for next year.

This is the point in games where teams give up, where teams lose hope. In spots like this, people throw their hat in the ring and call it a game. That is not the case with this Howell team.

With the ball on their own 8 yard line, the Highlanders mustered play after play of gutsy gains. They scratched and clawed for each individual extra yard. Even after having an 87 yard touchdown by Junior Trevor Wetzel called back, they still continued to battle. Finally, after driving the length of the field, Colten Fischer connected with Trevor Wetzel for a nine yard bullet as time expired.

The Highlanders move to 1-4 (1-2 in the conference) on the year and Grand Blanc improves to 4-1 (3-0). If this game proved anything, it was the grit, fortitude, and sheer determination of the Highlanders. As the great Winston Churchill once stated, “Never, Never, Never give up.”