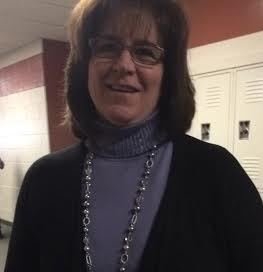 On Dec. 1, in an after school ceremony in the Howell High School cafeteria Laura Rumohr was honored as Howell’s newest Service Person of the Year.

“It’s obviously a great honor. A lot of others do the same, and I hope that each one of them has this opportunity.” Rumohr says.

“Every time I have to move buildings it’s hard to leave, even a little scary when you have to change to another age group so fast.” Rumohr says.

She is currently working as the teacher for senior Travis Walker, as she has done for the past 8 years since he was an elementary schooler. She has played a vital role to the development of Travis. The amount of time that Rumohr has dedicated to her student is astounding and is just one of the reasons that she was nominated for this honor.

“I’ve known him since he was in Kindergarten, I followed him up through middle school and high school to help him become as independent as possible. He knows he can ask me anything.” Rumohr says.

Howell’s Service Person of the Year is given to not just anyone. Requirements for the honor include “exceptional dedication, knowledgeable, and skilled member of the staff”, “going above and beyond the call of duty”, “supporting of the learning environment”, and “play and active role in the community/school”. The final winners are selected by a board of members around Howell education. The group that selects the winner is comprised of members from each of the buildings from Howell.

Rumohr has no plans of changing her course away from Howell Public Schools anytime soon.

“I love working here. The staff is truly fantastic, they really are. I look forward to every day I have here.”