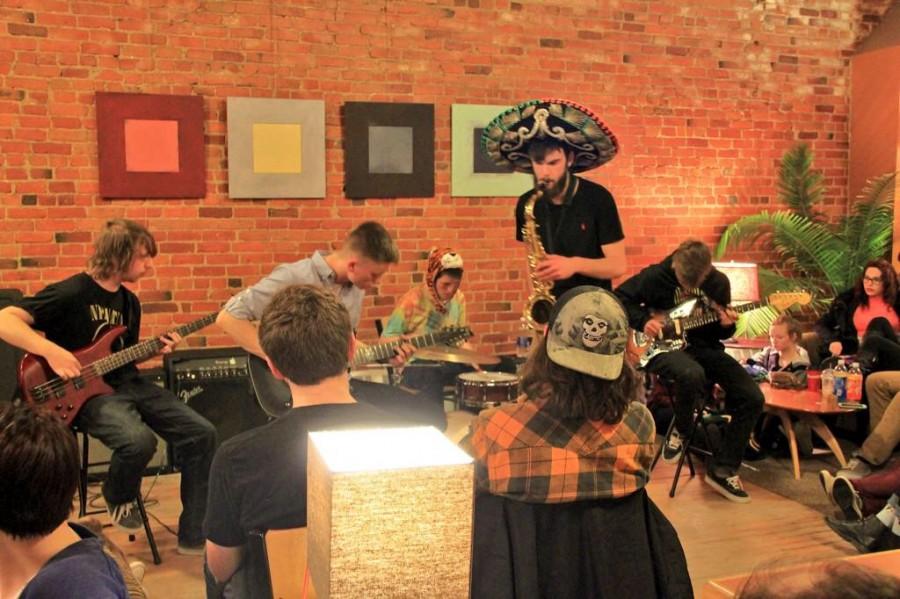 This past Saturday March 7, at the popular hangout spot Uptown Coffeehouse, a magical musical performance occurred. A man who introduced himself as Cameron played acoustic bluegrass; a chill alt-rock band from Brighton, A Hero Falls, then performed; and finally the band Era of Peace–made up of ridiculously talented teenagers who get together and make beautiful, gnarly tunes–wrapped up the night.

The crowd of music lovers, both young and old, sat comfortably around the coffeehouse, lattes and mochas clutched tightly in their hands. Much of the audience consisted of Howell High School students and graduates who came out for a night of incredible live music and friendly camaraderie amongst music appreciators.

The first musician, Cameron, performed spontaneously after Jaimie Wilson, HHS senior, became afflicted with illness thus rendering her unable to sing. Good ol’ Cam had rushed back home to grab his guitar and transported the audience to the hills of Kentucky. Contrasting with the later acts, he yodeled his way into our hearts. His set featured both covers and originals, and he finished his performance with a call-and-response song to interact with the audience. Lacking a microphone, Cameron was obligated to sing over the sounds of the baristas. Although he continuously mentioned his nervousness, it did not seem to affect his playing, as each song was followed by a reasonable amount of applause.

As Cameron retired to his seat, the next group began to set up. A Hero Falls is composed of band members April, Ryan, Bud, and Jake.  They opened with the explanation that they don’t normally play acoustic shows and that their new album Basement Famous had recently been released.  The singer, April, was decent; however, it was off-putting that she remained seated throughout the entire performance. The instrumentalists definitely carried the band, and they were especially necessary as April was a bit under the weather and her singing was suffering. Nevertheless, A Hero Falls added an interesting element to the night.

Era of Peace is made up of up Arik Fritz (guitarist), David Day (guitarist), Clayton Pierce (drummer), Mark Carr (saxophonist), and Alec Schrader (bassist).  These HHS students, current and former, have a relatively large local following.  Many of their fans came to show their support. Without an introduction, they launched right into their twenty-minute set. They transitioned between their songs without breaks, playing their entire EP flawlessly. Era of Peace’s sound is almost indescribable. The combination of heavy drumming, smooth sax, and insane guitar riffs somehow came together to birth an enchanting set.

Overall, the audience seemed satisfied by the grandeur of the evening. The event was a great way for local musicians to exhibit their accomplishments, and for everyone else to support the local music scene while having a thoroughly enjoyable night.